By Paula Gordon on April 16, 2019 in comments welcome, in memoriam 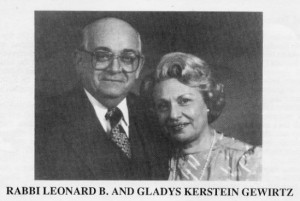 It is with sadness and regret that we inform you of the passing of Gladys Kerstein Gewirtz.

Gladys passed away on April 14, 2019, at home in the Jerusalem neighborhood of Ramot Aleph, in the company of her son Yossi and daughter-in-law, Debbie, and her loving live-in health aide, Mia. The funeral was held on April 15th, in Israel. Gladys is buried next to her late husband, Rabbi Leonard B. Gewirtz, of blessed memory.

May HaShem comfort the Gewirtz family among the mourners of Zion and Jerusalem.

Condolences and contributions may be sent to the AKSE office, and cards will be forwarded to the family (cards and/or donations by mail: P.O. Box 7305, Wilmington, DE 19803-7305; donations online: http://akse.org/donation/).

Tribute from an admiring student and congregant

Gladys Gewirtz, of blessed memory, was a quiet and reserved person of extraordinary range, achievement, and purpose. When her name is mentioned, the immediate thought is “Rabbi Leonard B. Gewirtz’s wife.” Mrs. Gewirtz was a devoted wife of 55 years, a true Eishet Chayil (Woman of Valor). The words of the poem fit her well: “Her worth is far beyond rubies. Her husband puts his confidence in her and lacks no good thing. She is good to him, never bad, all the days of her life.” Nothing could be truer of Mrs. Gewirtz. Rabbi Gewirtz trusted her and depended on her fully, and the two were an invincible team. It could not have been easy or painless to be a Rabbi’s wife in a relatively small town. But their combined 100-plus years of service to Adas Kodesch Shel Emeth are a testament to their—and her—success.

Mrs. Gewirtz was, however, far more than just “the Rabbi’s wife.” She taught for many years at the AKSE Hebrew School, Gratz Hebrew High School, and the University of Delaware, and was an accomplished singer and Israeli dancer. From 1971 to 1993, Mrs. Gewirtz designed and implemented the curriculum of the Hebrew School, which in those days often boasted an enrollment of nearly 100 students.

It was Mrs. Gewirtz’s persona, her being, her neshama (soul), that set her apart and brought her the admiration she deserved. Mrs. Gewirtz was a lovely person. She was well spoken with a soft and gentle voice, exceptionally bright and learned, and radiant in appearance. She exhibited a natural self-confidence that was instantly recognizable. Mrs. Gewirtz had presence—she could sit quietly yet be fully confident and at ease with herself. It was this being that is greatly missed.

We welcome your comments, reminiscences, and anecdotes about Gladys and Rabbi Gewirtz and your experiences as a congregant or student during their long tenure at AKSE (scroll down for the comment section). All comments will be moderated — that is, they will not appear on the site immediately.

Many thanks to Gail Pietrzyk, archivist of the Jewish Historical Society of Delaware (JHSD) for providing clippings and photos as background for the obituary, to Harriet Ainbinder for providing additional information, and to Mark Wagman for editing and proofreading all the tributes posted here.

Scroll down to read comments and to submit your own.

Expanded obituary (a shorter version appeared in the April 19 edition of The News Journal): 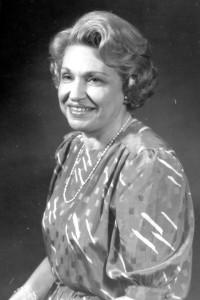 Gladys was the Rebbetzin of congregation Adas Kodesch Shel Emeth in Wilmington, Delaware, from November 1948, when she married Rabbi Leonard B. Gewirtz, until he retired and became Rabbi Emeritus in 1990. They continued in their roles as leaders in the Wilmington Jewish community throughout the 1990s. After the Rabbi’s death in 2003, Gladys remained a respected authority in Judaic learning. She was a mentor, counselor, and beloved friend (often all three) to many, maintaining these close relationships even after moving to Israel in 2012.

Gladys was born and grew up in New York City. She was a precocious student, graduating at age 12 from Hebrew high school and at age 17 from the Hebrew Teachers Training School for Girls (Beit Midrash le-Morot, later affiliated with Yeshiva University) — this in addition to attending secular public school. 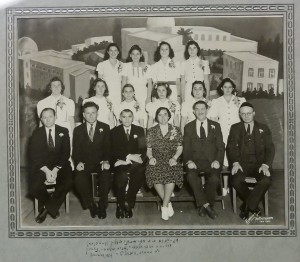 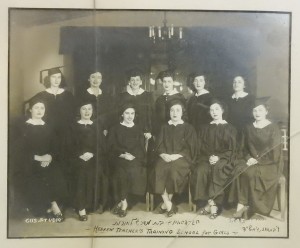 After receiving her teacher’s diploma, she began teaching Hebrew School five days a week. At the same time, she attended Brooklyn College, majoring in English Literature, and continued her Hebrew education in the masters program of the Jewish Theological Seminary. Gladys was in her senior year of college when she was introduced to Rabbi Leonard B. Gewirtz. In a 1984 News Journal article, he said that he left a doctoral program in Chicago to take a position in Wilmington so that he could be within commuting distance of New York City, the better to court her.

Gladys began teaching in the AKSE religious school in 1951. In 1971, she became the curriculum and faculty advisor of the school, a position she held through spring 1993. She taught at Wilmington Gratz Hebrew High School from its inception in 1965, and taught modern Hebrew at the University of Delaware for many years. She planned and led innumerable classes, assemblies, and presentations for and with children and adults of all ages. 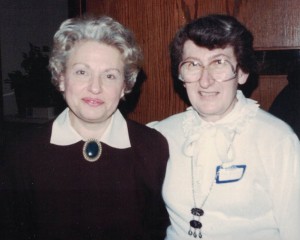 In remarks she made in 2012, she summed up her career this way:

For me, the most wonderful part of my role in Wilmington has been teaching and developing relationships with my fellow educators – several of whom became my closest friends here – and of course, with my students.[…] I have discovered first-hand how true are the words of Rabbi Hanina in the Talmudic Tractate of Ta’anit: ‘I have learned much from my teachers, and from my friends even more, but most of all I have learned from my students.’

Gladys is survived by sons Isaac Gewirtz of Bronxville, NY, and Yossi Gevir (Debbie) of Hashmonaim, Israel, five grandchildren, and two great-grandchildren. She was predeceased by her husband, Rabbi Leonard B. Gewirtz, and her parents, Solomon and Beatrice Kerstein.

6 Responses to In Memoriam, Gladys Gewirtz