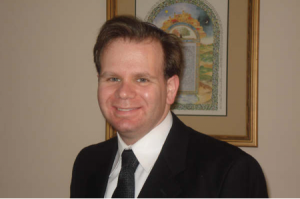 Rabbi Steven Saks is the full-time spiritual leader of Adas Kodesch Shel Emeth Congregation. Rabbi Saks received s’micha (rabbinic ordination) in August 2006 from Kollel Ayshel Avraham in Spring Valley, NY.  He holds a Master of Science degree in Human Resource Development from Towson University, a Bachelor of Arts degree from the State University of New York at Oswego, as well as a black belt in Jiu Jitsu.

Prior to coming to Adas Kodesch Shel Emeth, in August 2008, Rabbi Saks was the spiritual leader of Adath Zion Congregation in Philadelphia.  His past experiences include teaching classes in religious and secular studies, working as a hospital chaplain, serving as a Big Brother through the Jewish Big Brother/Sister League, teaching Jiu Jitsu and participating, on two occasions, in the Volunteers for Israel Army Program.

Rabbi Saks believes that there is a need to strengthen Judaism’s religious center, which has been referred to as “Traditional.” He sees our challenge as similar to that of the early Hasmoneans (Macabees): to remain true to Halacha (Jewish laws and practices) while at the same time embracing the positive attributes of secular culture. Another important issue, in Rabbi Saks’s view, is to build welcoming Jewish communities. Rabbi Saks believes that every Jewish person should endeavor to climb the ladder of mitzvot at his/her own pace and within his/her comfort level. Rabbi Saks has visited Israel six times; he and Anne led a community-wide trip to Israel in June 2014 and look forward to leading another trip in the future..

Since coming to Adas Kodesch Shel Emeth Rabbi Saks has served as the head of the Delaware Association of Rabbis and Cantor’s, heads the Vaad HaKashrut of Delaware, is the rabbinical head of the Chevra kaddisha (burial society) and is active in communal organizations such as the Siegel Jewish Community Center of Delaware, Albert Einstein Academy (the local Jewish day school) and national organizations such as the American Israel Public Affairs Committee and Israel Bonds.

Rabbi Saks and his wife, Anne, have four daughters; Talia, Gavriella, and twins Elisheva and Margalit.  Anne Saks has worked as an operations research manager, a high school mathematics teacher, and a math tutor. She attended Cornell University where she received her Bachelor of Science and Master of Engineering degrees in Operations Research and Industrial Engineering.

He teaches a popular class weekly called Parsha & Pizza, which is open to the community.